If you would like to submit a modified, new or improved guide of this river please click here

This River is Rated as: 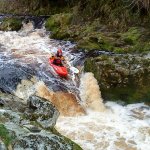 The River Nore is one of the Three Sisters rivers which flow into the sea at Waterford Harbour. The river passes near Durrow, County Laois then through Ballyragget, Kilkenny city and then the villages of Bennettsbridge and Thomastown.It forms a picturesque V-shaped river valley, particularly notable near the village of Inistiogue, the tidal limit. Major tributaries of the Nore include the Dinin, the Breagagh at Kilkenny City, the King's River, the Little Arrigle and the Black Water.

The river is long and mostly flat. Dotted with weirs at most of the villages it passes through. Some of these weirs have good playboating qualities.

This is a typical large volume lowland river much like the Boyne / Liffey or Castleconnell.

Directions to the Put-in

The Nore rises on the eastern slopes of the Devil's Bit Mountain in County Tipperary, flowing south-eastwards into County Laois and County Kilkenny before joining the River Barrow just north of New Ross. It is 87 miles long. The full length of the river is navigable, just pick up a map and get on where ever you wish, popular start points are Kilkenny city, Bennetsbridge, Thomastown etc.

Two less popular places to get in but can be rewarding are at Three Castles bridge on the Kilkenny Castlecomer Road or if you just want a run through Kilkenny try at a location just north of Kilkenny called Bleach Green. The road runs right by the river and the get in is just above the Bleach Green Weir

Directions to the Take-out

Again you can pick any point you wish along the river, but due to the long long stretches of flat water I would attempt to cover too much water in one day.

The levels follow the same rise and fall pattern every year, starting off in the summer the river has become very low, all the weirs are quiet a scrape, then as the autumn come in the levels rise and fall regularly, slowly building up around November the river starts its steady rise to a high level at which it remains till late January early February then the level slowly begins to drop away again into the summer levels again.

Some of the better weirs are as follows:

Bleach Road Weir: This weir is right facing and is abut 3-4 feet high, the weir is easy to shoot but best run at the closer to it down stream end. The weir flows directly into an undercut bank and lots of trees. It sounds more extreme than it it but do be aware of the hazard. This area is very popular with swimmers so large groups of paddlers can be stuck for space at the get on. There is a life guard on duty for the summer months and there has never been an issues here.

Greensbrige (Bishops Weir): I am referring to the "new weir" 500m up River of Greens Bridge. This weir was formed as part of the Nore river drainage scheme 4ish years ago, I have paddled this spot countless times and to my knowledge there are no hazards such as grates etc. in near or around this feature. The weir is a downstream U shape and in all but extremely high water forms 2 waves/holes, one either side of the weir.

This is not the deepest spot in the world but there is plenty of fun to be had here. Moves possible are basic enough but I cannot think of anywhere better to teach beginners the basics of freestyle such as spinning/side surfing/blasting/low angle ends/ etc. Reason being it is not super retentive, super easy to catch, rescue and recovery is easy too. As with all features it depends on what the water level is like on the day, all levels are useful apart from super low (there will only be a trickle) and super high (either be washed out or almost washed out with a nasty seem that doesn't let go too easy) highly recommended for beginners of for improvers to get the basics sharpened in controlled location.

Ormonde / Kilkenny Castle Weir is around 4-5 feet is left facing and very long. Even though new is pretty overgrown in the centre and lower section. The previous guide suggests that this weir be shot using the fish tanks, this is not advised as the likeness of vertical pinning is extremely high. Inspect and make your own decision. Extreme river left provided the most drama free route.

Lacken Weir: Approximately 300m down from Ormonde weir is the recently re modelled Lacken Weir, this is a tall weir around 8-9 foot at the lower end. It has a very rocky rumble section on the right which need a lot of water. The left face of the weir can be shot just about anywhere in high water, but there is a chute 2/3 of the way down the lower end.( As of December 2013 there is alot of rebar visible iat lowe water levels on the run out of the chute. ), On revision if you are running river left I would advising going as far left as possible due to steel in the water)  The river right route can be very bony and is not a place to swim or capsize, .

Bretts Mill Weir. Pass under the high by-pass bridge you leave the city and the surroundings become far more country side. 500m or so after the bridge you come to Bretts Mill ,this 5ft weir faces right and has three chutes and in lower water is best at the lower end. The river is shallow below but the flow on the left hand bank below the weir runs straight under trees. In higher flows this can provide a surprisingly power stopper so just be aware.

Collis' Weir/Maddoxstown Below: After some brief flat water you approach the next feature which is a nice wave train in higher flows with some surf able waves for longer boats. Après the wave train this there is another 4ft right facing weir with 1 chute in the middle. There is some limited playboating potential here in the stopper on river right with big blasts and spins being the order of the day.

There are a number of small broken weirs on this section and minor rapids. The last of these is at Ballyreddin. This is about 2-3ft very broken and rocky and is located where the new M9 crosses the Nore.

Bennetsbridge V Weir: As you pass under the stone bridge in the village you are right on top of the weir. This is a monster around 12 feet plus in height, this weir is said to have the longest run in length, of any v-shaped weir in Europe!. There is often debris caught on the weir face so boat inspect before running. Can be shot over the sides in high water but the centre V is the place down a long ramp and into a mighty haystack below. The breaking wave at the bottom of the V, its bark is far worse than its bit and is not retentive apart from in extremely high flood waters. Dont be fooled thinking this is a great freestyle spot as there is a nice concrete ledge lurking right in front of the wave.

After this the weirs are less frequent though many weirs used to populate this section. No the only significant ones are a small weir in Annamult right facing and uneventful, and then The Mount Juliet Salmon Weir which can be an interesting shoot in decent water. following that one would put up with the considerable slog to get to the old Thomastown V Weir, which was a beautiful weir though now sadly broken .

Thomastown Hole: By far the best feature in the immediate area as far as Im concerned. Again its a v-shaped weir. in the centre a hole/wave forms. At high levels its a small wave hard to catch, but good for messing around, at these high level the side of the v can be very retentive and reticulating so be careful. At a medium level, this forms a lovely hole. Nicely balanced, with a soft foam pile, most hole moves are possible here. It is easily to drop into from above or paddle up the eddy from behind and drop in from the side.

From Thomastown the river continues on to New Ross via Inistioge, while the river at this point may not offer much to those seeking white water it is a worthwhile journey to those who enjoy touring and things at a more relaxed pace.

Since major floods in recent years a large part of the weir in Thomastown has broken away and it no longer forms a play spot. Their has been a survey in recent months and it is said that the river right side of the weir is now beginning undercut on the up river side.

None as far as I am aware. Paddling has a good rep. in these regions. The paddling shop in Kilkenny is Padmore and Barns. There is a canoe club Tullow Co Carlow, Kilkenny and Thomastown, Co Kilkenny.

The river Nore is fished almost all of it length but this has never caused any issues with boaters or fishermen, please be respectful to each other.

Any where along its length just look if you can see the river bed its low, if its over the bank it high.

After the Weir on the Bleach road there are very often tress blocking the most part of the river, do inspect if you have a beginner group.

The Weir at Lacken deserves some inspection and while not difficult would provide a major hazard to a swimmer. THe chute / river left options on Lacken weir have a large amount of exposed re bar in the water at lower levels. Please inspect. Either run the rocky ramp or extremely river left.

Please use the forum for banter or questions.
Please add river details by adding to/editing the guide.